The Tanami Project, located in the Kimberley region of WA, occupies approximately 900km2. It is positioned approximately 1,500km northeast of Perth, 220km south-southeast of Halls Creek in the Tanami desert, adjacent with the Northern Territory (NT) border.

While a remote area, the Tanami Road provides access to the project from Halls Creek, with station and exploration tracks providing access to prospects. Currently under care and maintenance, the Coyote Gold Mine is the region’s most significant modern mining project. Northern Star Resources Limited own the Coyote Gold Mine, the village and operations are located just 10km from the project area.

REE’s have historically been targeted within the project and are considered a focus for future exploration efforts. The PGE potential has not historically been tested by explorers in the project area, however the knowledge gained from recent discoveries of layered mafic hosted PGE’s in otherwise Granite / Metasedimentary dominated regions adds to the suite of possible mineralisation styles. PVW will be investigating known magnetic anomalies that require testing to confirm lithology and geochemistry. 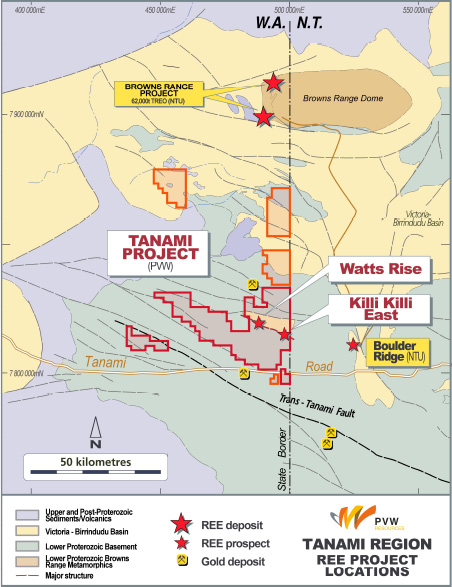 The bedrock geology of the Project area is dominated by the Tanami Group sequence of Lower Proterozoic folded metasediments. The Killi Killi Formation overlies the Stubbins Formation, a sequence of metasediments and minor volcanics which in turn overlies Archaean basement. The Killi Killi Formation is a sequence of turbidites, predominantly sandstones, greywackes and shales metamorphosed to greenschist grade. Because of weathering and their composition, the rocks seldom outcrop and usually only do so as lateritised low ridges with quartz veining.

The structural grain of the district is west-northwest reflecting the major element of faulting, the Tanami Structural Corridor, which extends from the west into the Tanami and Granites/Callie goldfields of NT. Near the Coyote mine it is manifested in the large quartz reef referred to as the Tanami Fault reflecting a regional fracture.

Strongly magnetic bodies within stratigraphy have not been effectively targeted in historical exploration efforts.  They may have been intruded during rifting phases, folded with stratigraphy during orogenesis.  Their origin is uncertain and will be tested during exploration activities. 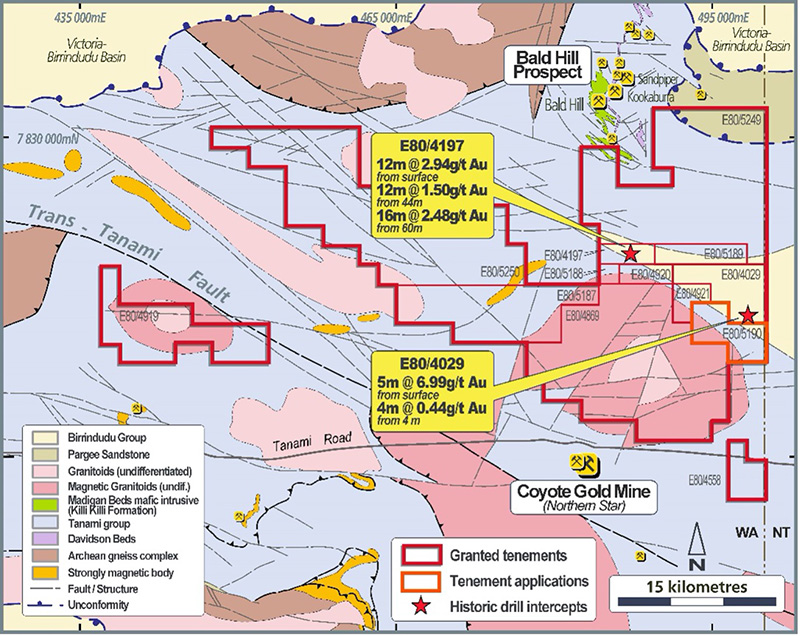 Regional geology of the Tanami Project

The early explorer Talbot passed through the area in 1909 and recorded the presence of gold at several locations in the Tanami. The project area was first explored commercially by Queensland Mines Ltd in 1969 as a uranium project that found small quantities of secondary uranium. However, a small suite of samples was analysed for yttrium and REE. Petrology was also done, and this work first confirmed the existence of crystalline xenotime mineralisation (Premoli & Day, 1970). Ongoing since the 1950’s, Geoscience Australia, GSWA and GSNT have undertaken geological mapping, compiled total magnetic intensity, bouguer gravity and radiometric images, and undertaken numerous research initiatives throughout the Tanami region.

Modern exploration in the project area has been dominated by the “Western Tanami Project” commenced by Shell in 1992 and continuing for 22 years through a series of tenements, deals and various joint ventures involving 8 other companies concluding with Tanami Gold NL, as follows:

The bulk of PVW’s efforts have been on integrating the regional data and reprocessing GSWA seismic data with a focus on interpretation of shallow data. The work to date has significantly improved the understanding of major structures and where they provide possible drill targets.  In conjunction with further geophysical data collection and interpretation, field work will be focused on follow up drilling of existing gold anomalies. Detailed geophysics will be ongoing and essential to efficiently target within the large tenement package.

The Tanami region which incorporates PVW’s Tanami Project has received around 22 years of modern exploration, in those 22 years 9 companies have explored for various commodities. Key points to consider following a short history of exploration:

Exploration success has been hampered by some significant geological obstacles, these are technical challenges that can be overcome and include:

Understanding these obstacles, provides PVW with an opportunity, and overcoming the technical challenges improves the likelihood of a discovery. 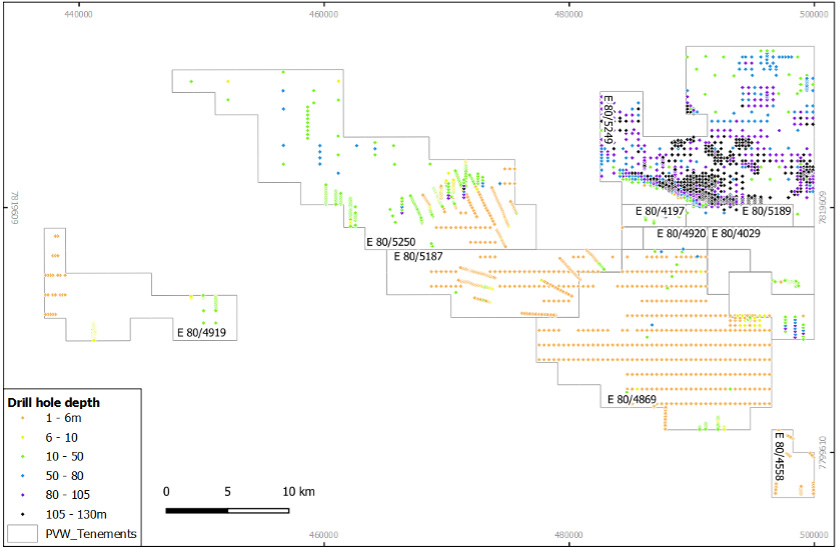