The Kalgoorlie Project is situated about 30km north of Kalgoorlie near Broad Arrow Townsite and the Norton Gold Paddington operations. Access to the project area is via haul roads heading east off the Goldfields and then through a series of station tracks and fence line tracks that dissect the project area.

Three project areas, Black Flag, King of the West, and Gordon Sidar comprise the Kalgoorlie Project. Together they are a very prospective exploration project across a varied greenstone and granite package. Mineralisation occurring close to the areas is varied and demonstrates the importance of understanding local geological controls.

Gold exploration drilling within the areas is surprisingly sparse and superficial given the location within 30km of Kalgoorlie and 15km from Kanowna. Often overlooked due to the granite dominated tenure, the large holding is now a significant opportunity for PVW Resources. 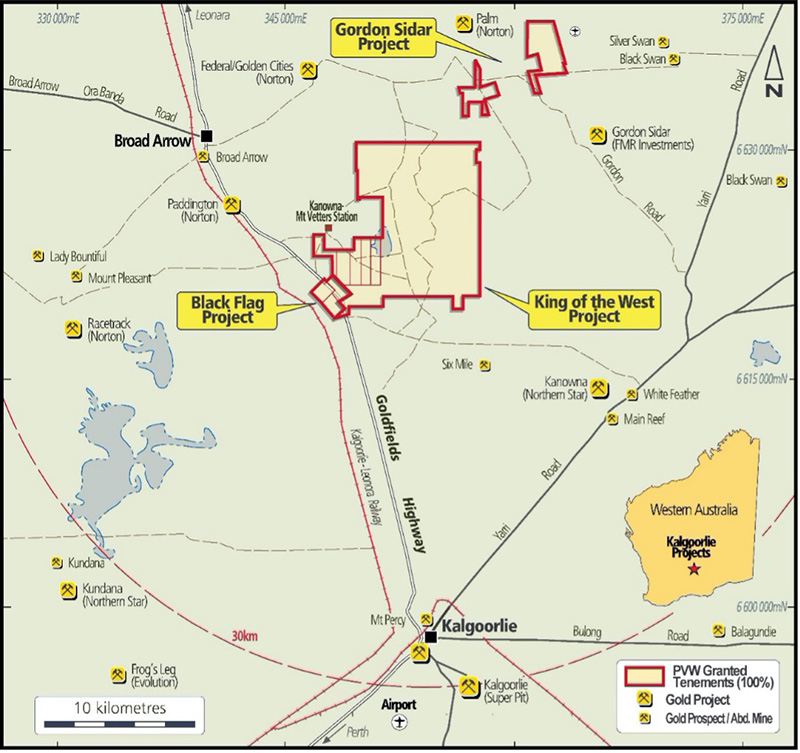 The Kalgoorlie Project is geologically located in the Boorara Domain a division of the Kalgoorlie Terrane, a major component of the Eastern Goldfields Superterrane. Terranes and Domains are bounded by interconnecting major fault systems. These fault systems are the target of exploration activities. Much of the project area is covered by sheetwash sandplain and minor colluvial and alluvial deposits. 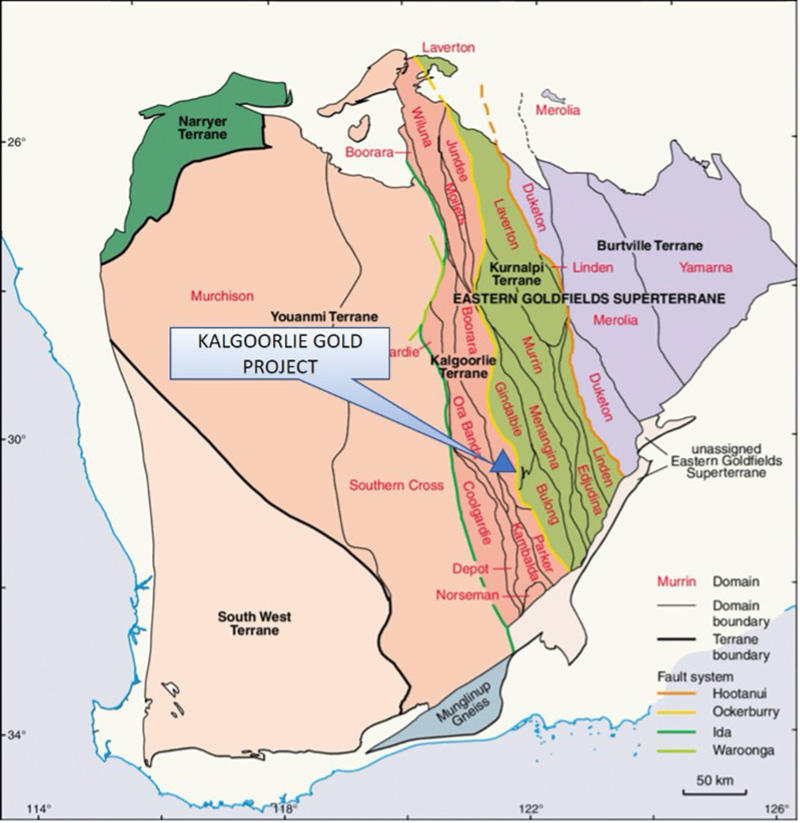 Geological location of the Kalgoorlie Project

The greenstone stratigraphy in the area is dominated by ultramafic, mafic and felsic volcanic rocks that are thrusted against the massive granite body known as the Scotia-Kanowna Batholith.

To the east a mafic-ultramafic sequence that forms part of the Mulgarrie to Gordons greenstone belt, hosts the Mulgarrie Mining Centre (Palm gold deposit).

To the west, small scale historical gold workings occur on PVW’s prospecting licenses. These include the Queen / King of Kings (Pioneer) prospects which are defined by numerous historical shafts are located predominantly withing a Chlorite / Sericite altered shearzone hosted in granitic lithologies. Gold mineralisation at the Golden Coin prospect is hosted by quartz veins within a porphyritic granite. Sericite and pyrite are associated with the short strike length veins, within east-west striking lodes, and uncertain dip.

Golden Cities, also known as Woodcutter, is located some 40 km north of Kalgoorlie in Western Australia. It is one of the largest granite hosted Archaean gold systems in Australia, and is unusual in being so distant laterally from the nearest greenstone belt.

At the Federal deposit, one of the deposits that makes up the Golden Cities goldfield, gold is hosted by hornblende-biotite granodiorite, 6 km from the nearest mapped contact with greenstones. The granodiorite in the Federal open pit is coarse-grained in the northern half, and fine-grained in the south. Both varieties host gold and are quite similar in mineralogy and geochemistry.

The Federal gold deposit is within a northwest striking (315°) and 60° northeast-dipping shear zone in the Scotia granite. The grain size variation of the host rocks may have influenced the style of deformation with more brittle fabrics in the coarse-grained phase and a more ductile response in the fine-grained granodiorite.

The structurally controlled small-scale workings at the Golden Coin and Queens prospects, the granite hosted Federal deposit and the shear hosted Mulgarrie deposits (Palm gold deposit), demonstrate the variable nature of gold mineralisation and the need to understand local controls. 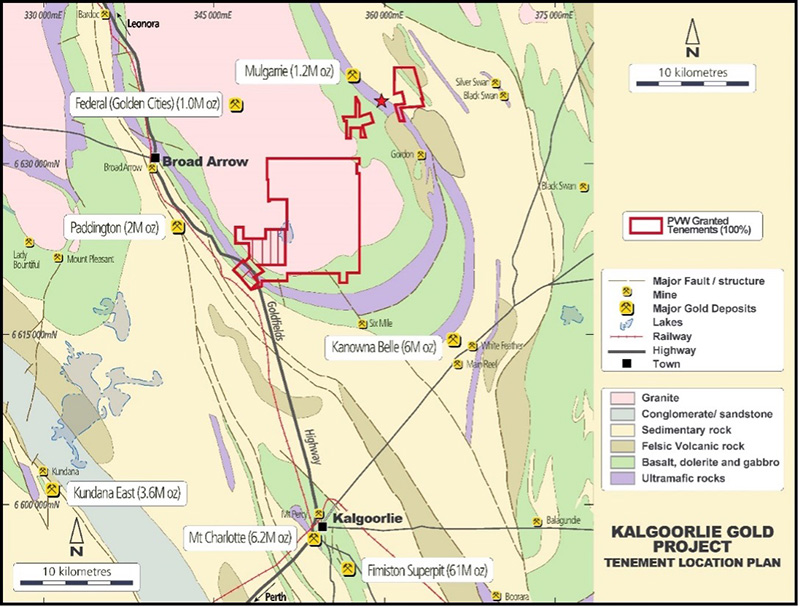 The Kalgoorlie Gold Project tenure has been continuously held by various exploration companies and prospectors since the nickel boom exploration phase of the late 1960’s. However surprisingly little effective exploration has occurred over much of the project area.

PVW Resources has undertaken minor on ground work, focusing on the development of new interpretations and targets following compilation and reprocessing of airborne magnetics and reprocessing of GSWA Seismic line data. The interpretive exercises have added conceptual targets to the known significant drill intercepts. PVW have immediate drill targets and several conceptual targets that provide the important opportunity for new discoveries.

The Kalgoorlie Project, incorporating Black Flag, King of the West and Gordon Sidar, has received sporadic and superficial exploration for gold. Key points to consider: