The Leonora Project is located in the Shire of Leonora, approximately 55km northwest of Leonora town in Western Australia. Access to tenements is from the Goldfields Highway or from the Leonora – Agnew Rd at the Bannockburn Mine site. Being close to existing infrastructure and well serviced towns ensures support for field activities. The Jungle Well and Minotaur Projects are contiguous along the Mt Clifford Shear Zone. Brilliant Well is east of the Goldfields Highway and covers a complicated greenstone / granite gneiss contact.

Numerous operating gold mines in the region include Thunderbox, and Darlot, with King of the Hills (Red 5) advancing towards development.

Gold has been mined at Jungle Well, with mining of a shallow oxide pit in 1996. Explorers have targeted Nickel within the Jungle Well and Minotaur tenements and base metals at Brilliant Well. Limited gold exploration has been completed and PVW believe there is significant potential within all the projects.

Nickel and base metal exploration efforts have resulted in quality geophysical datasets that will be reprocessed and interpreted with a view to identify and target gold hosting stratigraphy and structure. 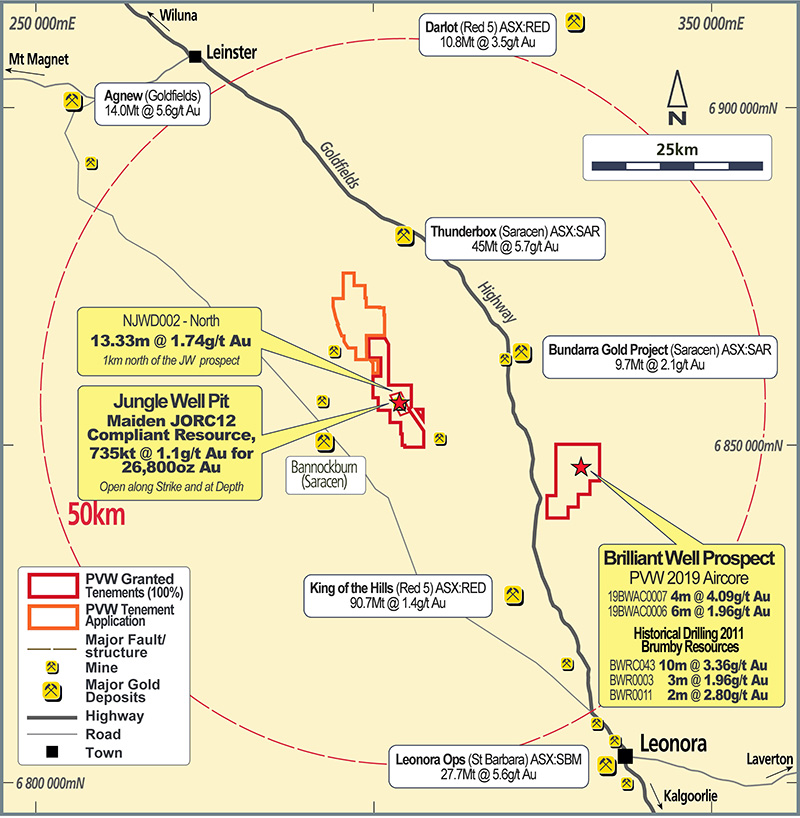 The Brilliant Well Project is geologically located at the western margin of the Kurnalpi Terrane, a major component of the Eastern Goldfields Superterrane. Jungle Well and Minotaur Project are located west of the terrane boundary within the Kalgoorlie Terrane. Terranes contain several Domains bounded by interconnecting major fault systems. These fault systems are the target of exploration activities. 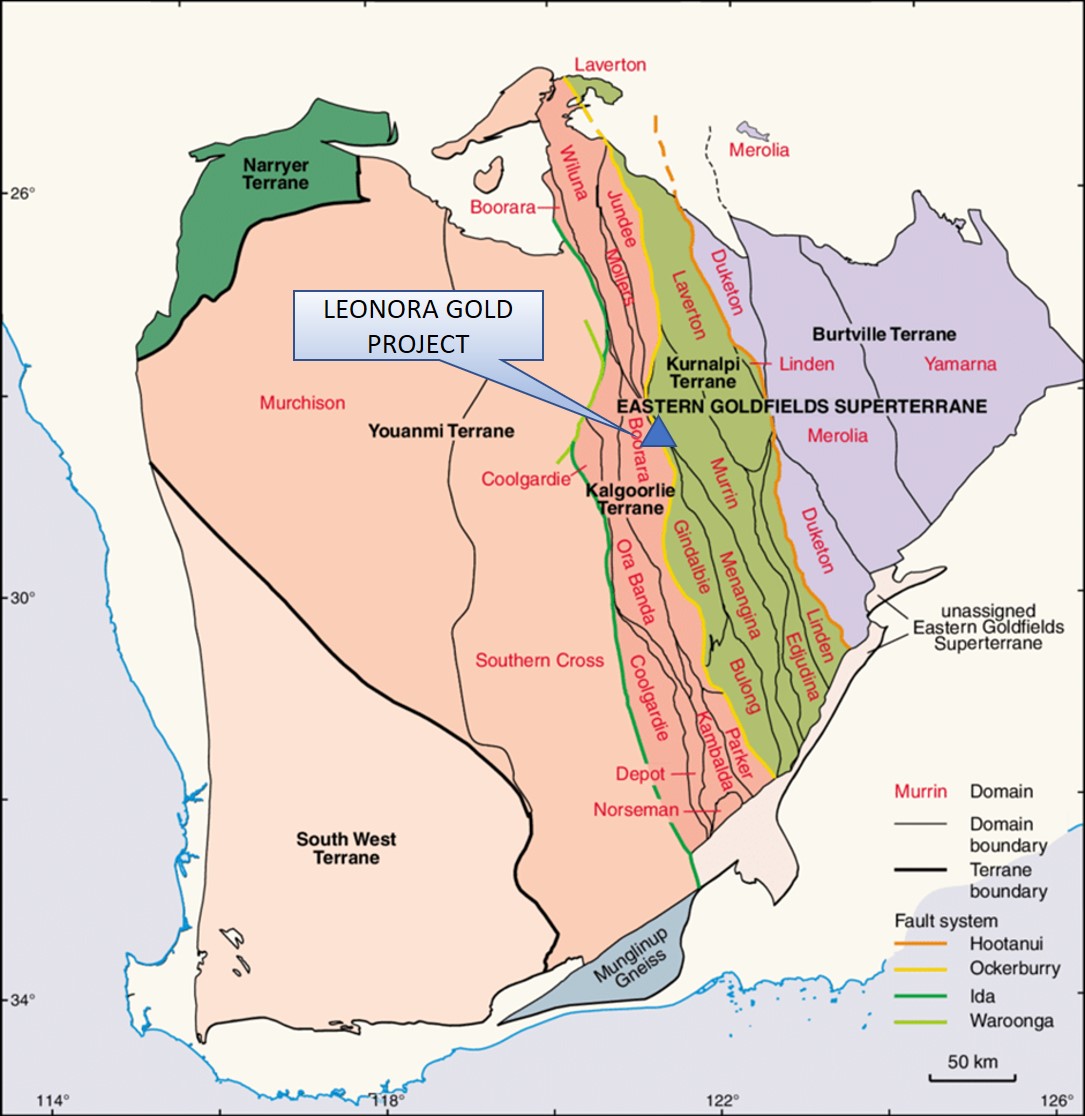 Geological location of the Leonora Project

The Kurnalpi Terrane comprises a sequence of mafic volcanic rocks, calc-alkaline complexes, sedimentary rocks and mafic intrusives overlain by bimodal rhyolite-basalt and felsic calc-alkaline complexes extending along the western edge of the terrane. The Teutonic Bore Complex, host to significant base metal mineralisation, is one of three significant bimodal calc – alkaline complexes. To the east (Brilliant Well) the stratigraphic succession is dominated by mafic granitoids which host numerous partially assimilated Archaean greenstone rafts.

The preferred host at the nearby Celtic Pits (Saracen – Bundarra Project) is a highly oxidised, coarse-grained granitoid. It varies in composition from a granodiorite, through tonalite to quartz diorite. Gold mineralisation occurs within the mafic granitoids close to their contacts with greenstones. Regionally gold mineralisation occurred late in the tectonic history and is strongly associated with the late shears and mafic granitoids.

At Jungle Well and Minotaur Project the Clifford, Minnieritchie and Perseverance Faults are the largest of a series of predominantly north-northwest trending structures. The Clifford Fault tracks along the Jungle Well and Minotaur Project areas and bounds the east of the Mt Fouracre Complex. Ultramafic rocks of the Marshall Pool Syncline are relatively undisturbed to the east of the Minnieritchie Fault.

Throughout the goldfields, thrust zones are an important control on mineralisation. There is an association between strike change and/or flattening of steep shears and gold mineralisation. Thrust repetitions of mineralised structures are also key to formation of large deposits.

With this in mind, Jungle Well and Minotaur Projects are located at the regional junction between major northwest to north-northwest trending shears and the north-south tectonic zone. Thrusts zones are visible in regional magnetics and locally within the Jungle Well open pit. 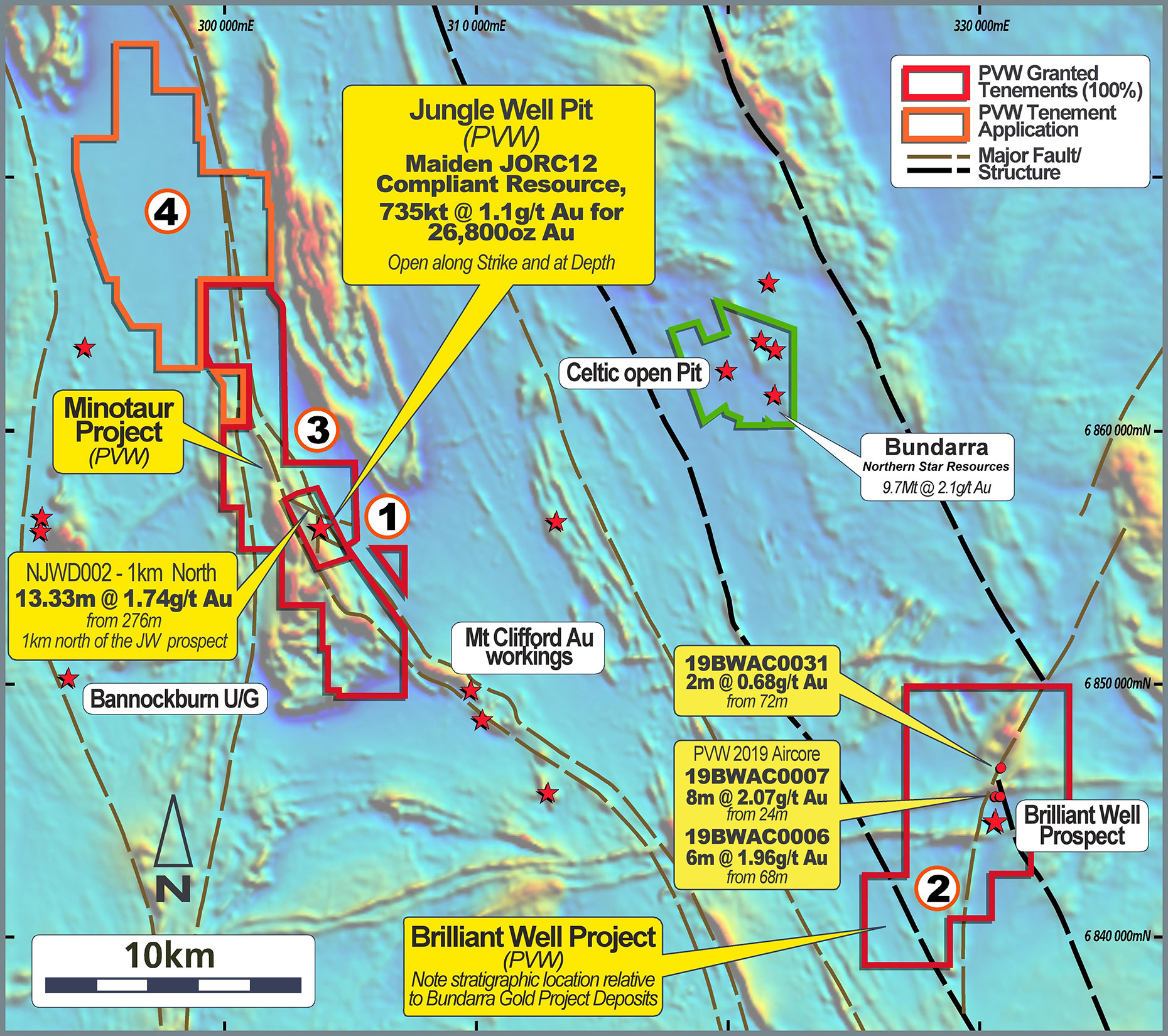 Within the bounds of the Minotaur Project, extensive nickel exploration was undertaken in the region during the 1960’s and 1970’s, most notably by WMC, Seltrust, Amax and BP Minerals. Some grassroots gold, nickel and PGE exploration was undertaken during and since the 1980’s, primarily by Outokumpu, Dominion, Forrestainia Resources, Dalrymple Resources, Miralga Mining, Lionore, Breakaway Resources and Minotaur Project.

Brilliant Well
Previous explorers for gold and base metals include Delta Gold, Sons of Gwalia Ltd, Pilbara Mines Ltd, and Brumby Resources Ltd. Explorers prior to Brumby focused on the Teutonic Bore Complex in the southwest of the tenement. Brumby explorers were more successful testing the granite/greenstone contact and major structural corridors, with anomalous and significant gold, copper and zinc results from drilling. Some of the Brumby gold results have been followed up by PVW Resources, with continued positive outcomes.

Exploration success has been hampered by some geological obstacles. These are technical challenges that can be overcome and include:

Given the positive results and the compilation of PVW Resource NL’s maiden JORC 2012 compliant Resource at the Jungle Well Project, the complete Mineral Resource Estimate summary, and supporting information, including the JORC Table 1, sections 1-3 are included below.

The Mineral Resource has been compiled under the supervision of Mr. Shaun Searle who is a director of Ashmore Advisory Pty Ltd and a Registered Member of the Australian Institute of Geoscientists. Mr. Searle has sufficient experience that is relevant to the style of mineralisation and type of deposit under consideration and to the activity that he has undertaken to qualify as a Competent Person as defined in the JORC Code.

All Mineral Resources figures reported in the table above represent estimates at November 2019. Mineral Resource estimates are not precise calculations, being dependent on the interpretation of limited information on the location, shape and continuity of the occurrence and on the available sampling results. The totals contained in the above table have been rounded to reflect the relative uncertainty of the estimate. Rounding may cause some computational discrepancies.